In the last article we showed How to Transfer files from Mac OS & Android MTP via USB , But its not possible to carry our USB cable all the time. So, In such cases we can share files from Android device to Mac OS even wirelessly! over WiFi. Sharing files between Mac OS & Android over WiFi doesn’t require any Internet or cellular data connection and is really fast using the Share It app. In this tutorial we will cover How to Transfer Files from Mac OS to Android or from Android to Mac OS X over WiFi by Share It app .

We will divide our tutorial into two parts –

Part . 1 – Method to Transfer or Share files from Mac OS X to Android over WiFi by Share It- 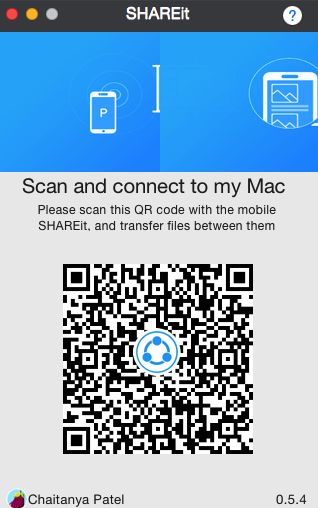 Important –  This method Requires both your Mac OS X & Android device to be connected to a common WiFi Network . The Common Network must not be coming from(hotspot) from either of the devices (Mac OS X or The Android Device) which are transferring files. We Recommend connecting both the devices to a 3rd Party WiFi Network e.x a WiFi Router , or a Hotspot created by a non-transfer involved Android Hotspot.

Note – Unlike the above method this method doesn’t require a 3rd party WiFi device , your Android device itself will act like a HotSpot WiFi and we need to connect to that WiFi on your Mac.

Cngratulations! You have now successfully shared files betwen your Mac OS X device and Android phone. If you face any problems or encounter any issues feel free to comment.