Today there are many incentive providing apps or apps which give incentives or free recharge to users on performing tasks like downloading apps or completing listed offers. But unfortunately with the number, the number of fake apps which lure users and don’t provide promised recharge/incentives too is on the rise . So, among these incentive app platform, we have a new app – Cash Boss app which comes from a branded company and developer – CouponDunia which is a well known website providing free coupons. 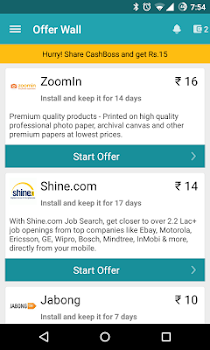 We would also like to hear your reviews/problems faced while using Cash Boss app if any..